The 50 foreign photographers from 24 countries and 20 Chinese photographers could not have come to Beijing at a better time of year — glorious, sunny May, with its attendant greening of nature and the warming of hearts after a cruel winter. To the visitors, the city appeared more high-rise-modern, colorful and beautiful than they could have imagined, and its 13 million people as friendly and welcoming as it is possible to be.

The invitees were in the Chinese capital to take part in a seven-day exercise called “World Photographers Focusing on Beijing”, the idea being to capture all possible facets of the capital and its citizens and to help show what, in a broad sense, makes it tick. In short, to collectively produce a kind of photographic microcosm which forms the content of this book.

To say the guests were astonished and excited by the photographic potential offered by the capital, and the warm cooperation of its officials and citizens, would be an understatement. One lens man went so far as to describe Beijing and its people as a “Pictorial goldmine”, and judging by the results overall, he was right.

From the photographers’ point of view, it was a challenge indeed to “Shoot” the countless aspects of Beijing in a mere seven days. But like the good professionals they are, they rose to it handsomely, with the great skills and techniques that place them among the world’s best.

In its 13 districts and five counties, Beijing has countless places of historical, cultural, architectural and social interest. For example, three sections of the Great Wall — at Badaling, Mutianyu and Simatai — are within its boundaries. We need not here describe this wonder of the world, other than acknowledge the old Chinese saying that “You have to climb the Great Wall to be a man”. Many have, many still do, including some of the foreign photographers.

They also discovered and recorded the stunning attractions of places like Beihai Park, the Temple of Heaven, Yuanmingyuan and Yonghegong. On the cultural front, they embraced the Peking Opera and much else that is uniquely Chinese. And like countless visitors before them, they were able to at least gain an insight into the country’s historical splendors and to meet and photograph ordinary people in their natural surroundings. These subjects in particular prove the old adage that a good picture is worth a thousand words.

The photographers were equally fascinated by old hutongs (residential alleys and lanes) and courtyards which, they agreed, “Breathe history in every stone” but which, to their surprise, are often just a stone’s throw from a modern highway. There is no better example of the mix of ancient and modern that exemplifies Beijing.

It is tempting to list all the places, people and other subjects focused on by the guests from overseas, but we feel it best to simply let their pictures do all the talking on how they saw Beijing. Certainly they continually voiced their surprise at Beijing’s architectural modernity and the “Swinging” fashions and values of young people, though not to the latter’s detriment, for they were equally impressed by their optimism about the future and their determination — like that of their parents — to help make Beijing an acknowledged world metropolis.

Some of the photographers have already published their pictures and thoughts about their visit, thus enlightening people in their home countries. Without exception, all of these reports were warm towards Beijing and its people and China in general. While naturally each photographer put his or her own spin and technique into their pictures, they were of common accord in seeing the Beijing that made them so welcome as: “vibrant, hopeful city to which we all one day want to return.”

There could be no higher compliment. 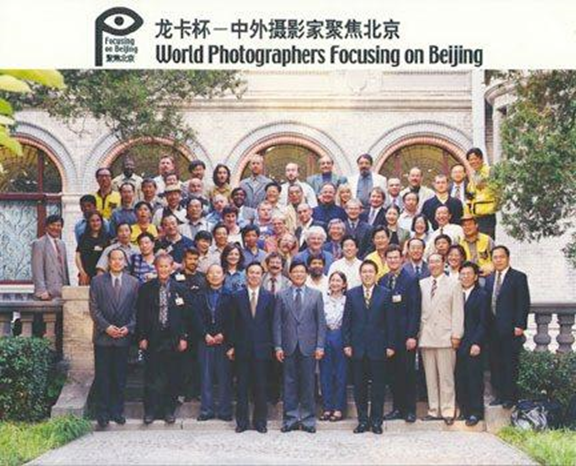 More than 50 foreign and 20 Chinese photographers came to Beijing for a seven-day exercise called “World Photographers Focusing on Beijing”, the idea being to capture all possible facets of the capital and its citizens and to help show what, in a broad sense, makes it tick. In short, to collectively produce a kind of photographic microcosm which forms the content of this book.